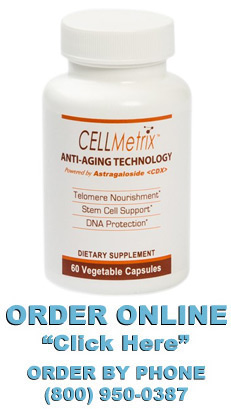 CELLMetrix is a one of a kind cellular support supplement formulated to positively affect many of the biomarkers that are involved with vitality and aging. CELLMetrix works on multiple levels to support cellular health throughout the body. This product was formulated using the latest scientific breakthroughs as well as ingredients that have a long history of evidence for their cellular benefits.

Children are protected from the ravages of aging and can rapidly recover from injury or illness. It is because the young have regenerative stem cells, which have a superior ability to repair and regenerate most damaged tissues. As we age, our stem cell populations become depleted and/or slowly lose their capacity to repair. Moreover, the micro-environment (i.e. niches) around stem cells becomes less nurturing with age, so cell turnover and repair are further reduced. This natural progression occurs so slowly that we are barely aware of the decline, hence aging. Unfortunately, we typically start noticing our body aging as early as our 30s and 40s, and especially after 50 years of age. 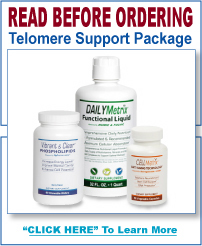 CELLMetrix™ works differently than other products on the market

You may have seen a number of products advertised as stimulating or enhancing stem cells. Each person only has a limited number, so using them up faster may not be a good strategy. CELLMetrix is about improving the effectiveness and longevity of your stem cells as well as preserving the stem cell micro-environment. The micro-environment declines with age due to a decline in capillary density and increases in basal inflammation, fibrosis, toxic waste products, and fat cells.

An effective stem cell therapy must address the declines in micro-environments, as stem cells will not respond well in a harmful or toxic environment. That is exactly what CELLMetrix is designed for!

CELLMetrix™ Beneficial Effects Based on the Literature of its Components

Astragalus compounds are shown to have the ability to inhibit chromosomal instability by supporting the chromosomes micro-environment. Scientific breakthroughs in the last five years have observed this to be a key factor to healthy aging.

One compound in Astragalus in a laboratory study on mice was shown to reduce of DNA damage and an improvement of DNA repair ability. Another similar study showed two Astragalus compounds delayed aging. In one paper a team of researchers from the UCLA AIDS Institute described how their work with a new drug derived from astragalus root not only reduces the aging process of immune cells, but also enhances how these cells respond to viral infections.

Astragalus root has a long history of use increase metabolism, stamina, strength and vitality. Scientist are now able to test and study in detail the compounds and the mechanisms of action for these benefits.

Scientists now believe that astragalus also works by stimulating several factors of the immune system. In laboratory studies, astragalus extracts increase the activity of monocytes, natural killer cells, and lymphocytes, In addition, astragalus has been shown to reverse immune suppression. In other studies Astragalus was shown to suppress airway hyper reactivity associated with allergic asthma in vivo and increase M-cholinergic receptor density in senile rats, which suggests that it may have a role in combating senility.

OPC is the acronym for “oligomeric proanthocyanidins,” a class of polyphenolic bioflavonoids. OPCs are nature's most powerful antioxidants. In fact, their usefulness in fighting free radicals and helping people lead a longer, healthier life is well established in scientific literature.

OPCs are a unique class of highly bioavailable flavanol compounds that protect and strengthen collagen, which make up skin, connective tissues and vascular walls by delaying aging in human vascular endothelial cells. By supporting the vascular walls you can enhance nutrient delivery to all parts of our body. OPCs also scavenge oxygen free radicals at a greater rate than vitamins C or E.

Pterostilbene is a dimethylated derivative of resveratrol and for some mechanisms, is more potent. It is also much better absorbed and is commonly referred to as a 'better resveratrol'. While most of the actions of the two are comparable, pterostilbene is much more absorbable following oral ingestion and may be a more potent antioxidant and anticancer molecule.

A study in 2012 stated, “Importantly, markers of cellular stress, inflammation and AD pathology were positively modulated by pterostilbene but not resveratrol and were associated with upregulation of peroxisome proliferator-activated receptor (PPAR) alpha expression.”

Pterocarpus marsupium demonstrates some very unique features, which include beta cell protective and regenerative properties. These effects have been reproduced in numerous animal and human trials for over half a century.

From the Indian Kino Tree, the flavonoid constituents marsupin, pterosupin and liquiritigenin, reduce serum triglycerides, total cholesterol and low-density lipoprotein in the blood. These and other flavonoids of Pterocarpus Marsupium have been studied and shown to have strong anti-oxidant properties and have a positive effect on cataracts in small animal studies.

Silybin and dehydrosilybin, two polyphenolic compounds, display a plethora of biological effects generally ascribed to their known antioxidant capacity. The fruit of the milk thistle plant contains flavonoids that are proven liver protectants. The standardized extract known as silymarin contains three flavonoids of the flavonol subclass. Silybin predominates, followed by silydianin and silychristin.

Endothelial progenitor cells (or EPC) is a term that has been applied to multiple different cell types that play roles in the regeneration of the endothelial lining of blood vessels. Clinical findings suggest that silymarin counteracts the inhibitory effects of rapamycin in EPCs. This protects EPCs against the antiproliferative effects of rapamycin and restore their reconstructive ability.

L-Theanine is an amino acid (a building block for proteins) found in green tea. Evidence from human electroencephalograph (EEG) studies show that it has a direct effect on the brain. L-theanine significantly increases activity in the alpha frequency band which indicates that it relaxes the mind without inducing drowsiness.

A study published in 2012 stated: Compounds that delay aging in model organisms may be of significant interest to anti-aging medicine, since these substances potentially provide pharmaceutical approaches to promote healthy lifespan in humans. In the model organism C. elegans, L-theanine is capable of promoting paraquat resistance and longevity suggesting that this compound may as well promote healthy lifespan in mammals and possibly humans.

Bioperine is the only source of piperine to obtain patented status for its ability to increase the bioavailability of nutritional compounds. Bioperine is also the only source of piperine to undergo clinical studies in the U.S. to substantiate its safety and efficacy for nutritional use. When Bioperine was administered orally to healthy humans in a dose of 5 mg per person per day, the serum levels of different tested nutrients significantly increased by up to 60%.

*These statements have not been evaluated by the FDA. This product is not intended to diagnose, treat, cure or prevent any disease. The information provided on this site is for informational purposes only and is not intended as a substitute for advice from your physician or other health care professional or any information contained on or in any product label or packaging. You should not use the information on this site for diagnosis or treatment of any health problem or for prescription of any medication or other treatment. You should consult with a healthcare professional before starting any diet, exercise or supplementation program, before taking any medication, or if you have or suspect you might have a health problem. You should not stop taking any pharmaceutical product without first consulting your prescribing physician. Resale of CELLMetrix without written permission is strictly prohibited.